10 Years Analysis for the H-1B Visa Program and Applications

The United States of America is a very popular working destination, in particular among youngsters. A high number of workers from all across the globe travel to the US under a work visa.

The H-1B visa also referred to as Person in Specialty Occupation Visa is among the most popular among non-American highly skilled professionals.

Brief History of the H-1B Visa

The H-1B visa is a non-immigrant visa, which allows companies in the United States to hire and bring to the US foreign workers in specialty occupations, who are in possession of an advanced educational degree.

The program offers the chance to IT specialists, architects, accountants, professors, doctors, lawyers, and other skilled professionals to temporarily move to the US and work there. The visa has a maximal cap of approved applications of 65,000, and an additional 20,000 applications for foreign professionals with a Master’s degree or higher.

The H-1B visa was created and signed into law in 1990 by President George H. W. Bush. Alongside with the H-1A visa created for nurses, it replaced the former H-1 visa established in 1952. The program went through a lot of changes, with the fee increasing on each update, and the rules getting tighter and tighter gradually.

Also known as Person in Specialty Occupation Visa, the program has often been criticized by different parties. The most frequent criticisms are related to allegations that “the H-1B holders taking jobs from Americans” and “the H-1B workers are exploited”.

In spite of the tighter rules, higher fees, criticism and the insecurity caused by the Trump Administration for visa holders and potential future applicants due to recent changes in the program, the H-1B visa petitions have reached the highest number ever in 2018.

Though the H-1B visa program has always been subject to changes, the program has undergone some major changes during the Presidency of Donald Trump. Within the last two years, not only the application process for an H-1B visa but also the denial and rejection rates have drastically changed.

With the signing of the executive order “Buy American and Hire American”, Trump made way for the introduction of several new rules and policies regarding the H-1B visa program. The most important (proposed/announced/undertaken) changes so far, are as follows:

An increase of H-1B Denials and Requests for Evidence

The number of H-1B denials and requests for evidence has increased under the Trump Administration, with the latter encountering a very high increase.

According to a report of the National Foundation for American Policy, while in the first quarter of 2018 the H-1B visa rejection rate was 19.8%, in the fourth quarter the rate increased to 22.4%. There was a drastic increase in the rate of Request for Evidence, with 17.3% being requested to submit additional documents in the first quarter, with 68.9% receiving a Request for Evidence in the fourth quarter of 2017.

The highlights of the report:

According to the report, the increase in denials and Requests for Evidence of even the most highly skilled applicants seeking permission to work in the US suggests that the Trump administration is interested in less immigration, and not “merit-based” immigration.

“Observers note the administration has implemented no policies to facilitate the hiring of high-skilled foreign nationals. Instead, U.S. Citizenship and Immigration Services has enacted a series of policies to make it more difficult for even the most highly educated scientists and engineers to work in the United States,” the report reads.

It also asserts that the USCIS no longer defers to prior determinations, approvals or findings of facts when extending a current H-1B or other high-skilled visas.

The popularity of H-1B visa has gradually increased especially among Asian countries. In 2018, the demand for an H-1B visa is higher than ever, and the numbers are expected to grow with this trend, next year and beyond.

We analyzed the latest official statistics on the number of H-1B visa applications based on nationality, gender and age as well the refusal rate, and came up with a number of conclusions.

Key findings of the report

In 2009, there were 122,475 applications filed by Indian nationals or 49.7% of the overall number of applications received by the United States Citizenship and Immigration Services. 10 years later, in 2018, the number spiked up to 309,986 applications or 73.9% of the total number of H-1B applications for that year.

Observers from VisaGuide.World believe that the recent changes introduced by the Trump Administration will have little to no effect on the interest of applicants from India to work in the US through the H-1B visa.

Gent Ukëhajdaraj from VisaGuide.World asserts that in case the DHS scraps work authorizations for H-4 visa holders, spouses of those in the US with an H-1B visa, only then the number of applications may be affected.

“If the US scraps the right of work for H-4 visa holders, only then the trend of the increasing number of applications by Indian nationals may stop or slow down.  However, if the H-4 visa holders will still be allowed to work in the future, the rest of the changes introduced for the H-1B visa program will show little to no change at all in the number of applications,” Ukëhajdaraj claims. 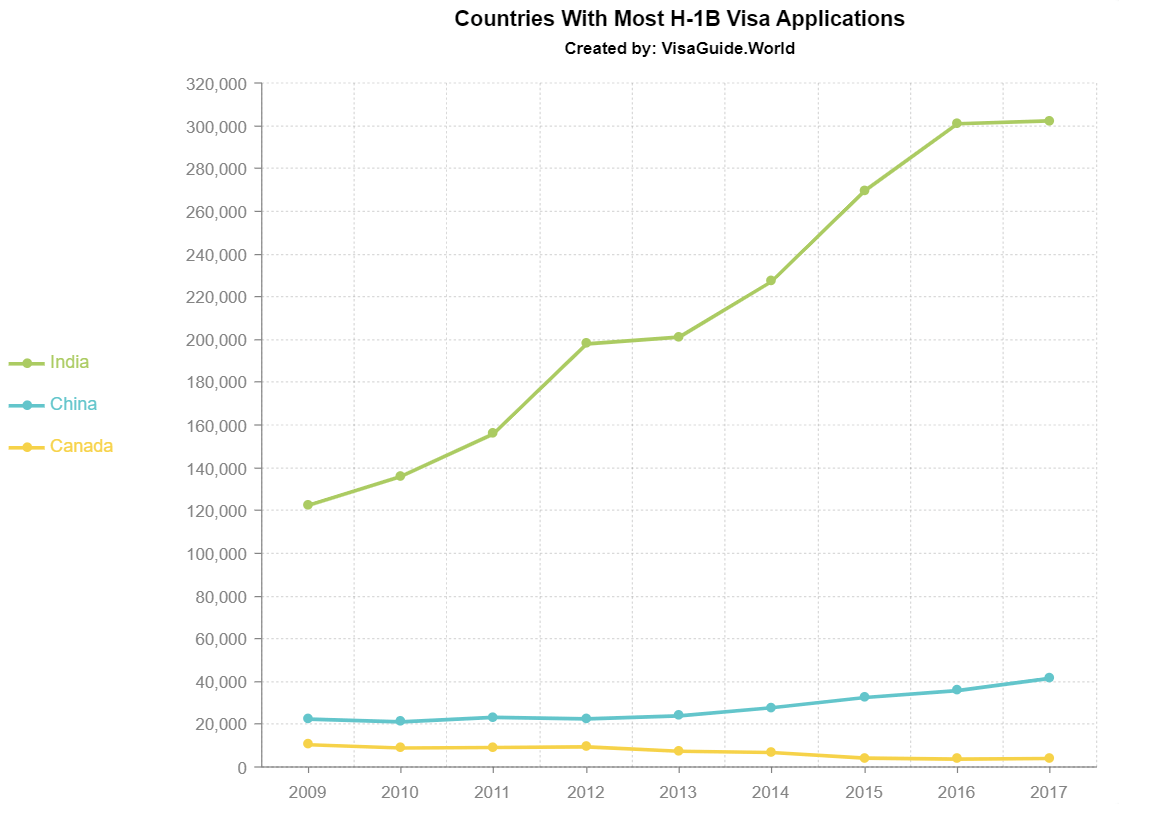 However, 2018 has been quite more difficult for Indians to get an H-1B visa. Aside of a slight increase on the number of denials, compared to the previous years, more Indians that applied for an H-1B visa received a Request for Evidence, which means they had to submit additional documents to support their application.

Only a Quarter of Applicants in 2018 Were Women

According to 2018 statistics, women accounted for only a quarter of the total number of H-1B visa applications.

In India, 20.4% of applicants were women. On the other side, in China, which is listed second with the largest group of applicants, 45.2% of applications were filed by women. As per Canada, third in this list, women accounted for 33.2% of the number of Canadian applicants for an H-1B visa.

Though Indian women hold only around 1/5 of the overall petitions filed by Indians, with 63,220 petitions in 2018 so far, the number is still almost 1.5 times higher than the petitions of the rest of the women of other nationalities combined.

The highest percentage of women applicants is held by Grenada, from which country 27 out of 33 applicants were women. 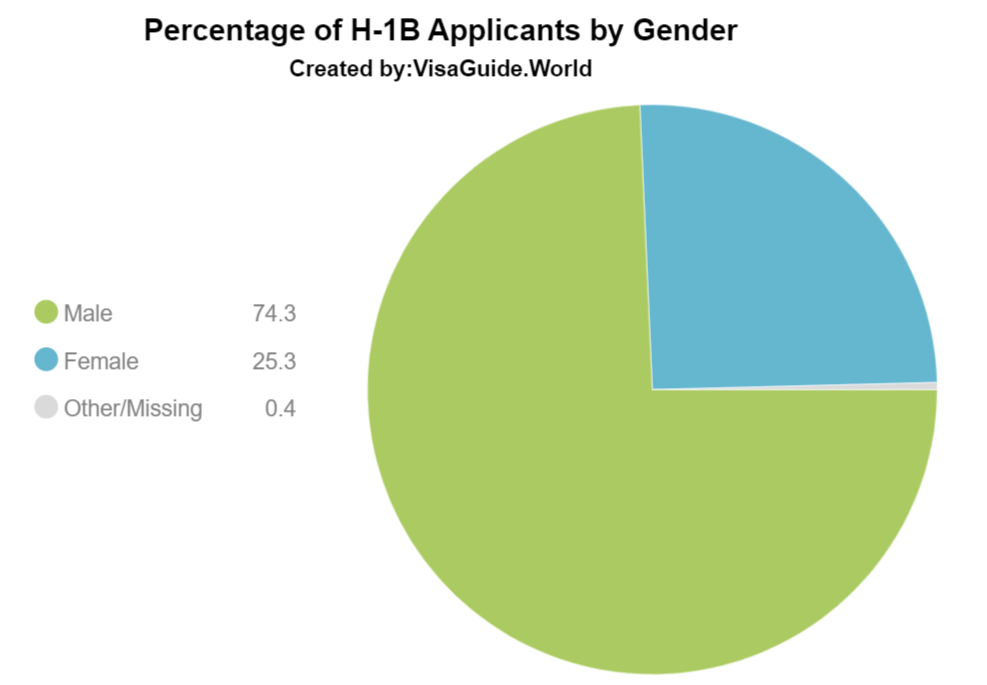 Nationals of Schengen Countries Not So Tempted by H-1B Visa

Only 8,129 skilled workers from the countries of the Schengen territory filed an H-1B visa application in 2018. French applicants make 20.6% of this number, with 1,681 applications filed.

Nationals of the Nordic countries have shown little, to no interest on the H-1B visa as well; despite a suggestion of President Trump that the US should bring more people from countries such as Norway, probably having in mind other highly developed EU countries.

During talks on an immigration deal that would include protections for people from Haiti and some nations in Africa, Trump called these countries “shi*hole countries”, and asked why the US isn’t bringing over people from Norway instead.

“The reason why the number of applications from these countries is so low is obvious. While the US is listed 13th in the Human Development Index 2018, Norway is listed the first. Eleven out of the first 20 positions of the index are occupied by countries of the Schengen or the EU. On the other side, the top two national groups of applicants, China and India, are listed 86th and 130th respectively,” Ella Worehead from VisaGuide asserts.

According to statistics, the number of H-1B applications from the EU/EFTA countries has immensely decreased.

The number of applicants from the United Kingdom has fine down from 5,394 in 2009 to 2,181 in 2018. The number of applications from France and Italy has also decreased. Spain is among the very few European countries that has marked an increase of 13%. 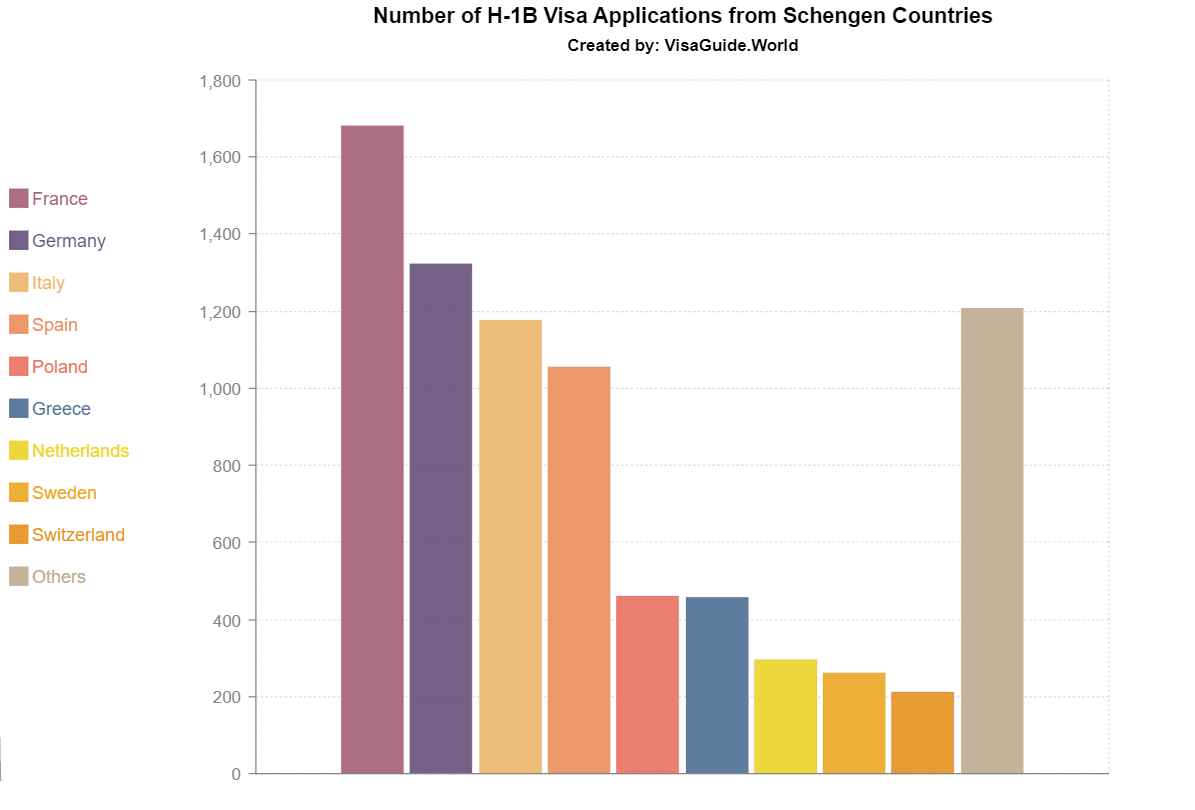 The number of applications from France, the second EU country with most annual H-1B visa applications after the UK, has been declining almost every year for more than a decade now.

Statistics show that over 45% less French citizens applied for an H-1B visa in 2018, compared to 2007. While the US Citizenship and Immigration Services received 3,056 H-1B visa applications in 2007, there was a noteworthy smaller number of 1,668 applications received in 2018.

However, the decrease in the number of applications from France has not been affected by the policies of Trump administration. In the years since Trump took office, the decrease has been much slighter than in the previous.

As for France in particular, according to statistics, the most drastic fall in applications seems to have happened between 2007 and 2008, when there were 558 fewer applications.

The number of H-1B visa applications from Turkey has reached a record low in 2018, the lowest number since the 2009 fiscal year. 50% fewer applications were filed by Turkish nationals in 2018, compared to 2009.

Ella Worehead from VisaGuide.World believes that the politically tensed relations between both countries may have driven the decline in H-1B applications.

“Statistics show that the decrease in the number of H-1B visa applications from Turkey started in 2007, the same year when relations between Turkey and the US started to get tense after the House Committee on Foreign Affairs had passed a US resolution on the Armenian Genocide in the Ottoman Empire. As a result, Turkey had then recalled its ambassador to the US,” Worehead explains.

“The number of applications increased to 2,724 in 2009, in which year President Obama made his first official visit to Turkey. However, in the following year, the decline continued to 2,467, then to 2,169 and so on. We cannot say for sure that the political situation drove the decrease in the number of H1B visa applicants from Turkey, but it surely was a factor,” Worehead concludes. 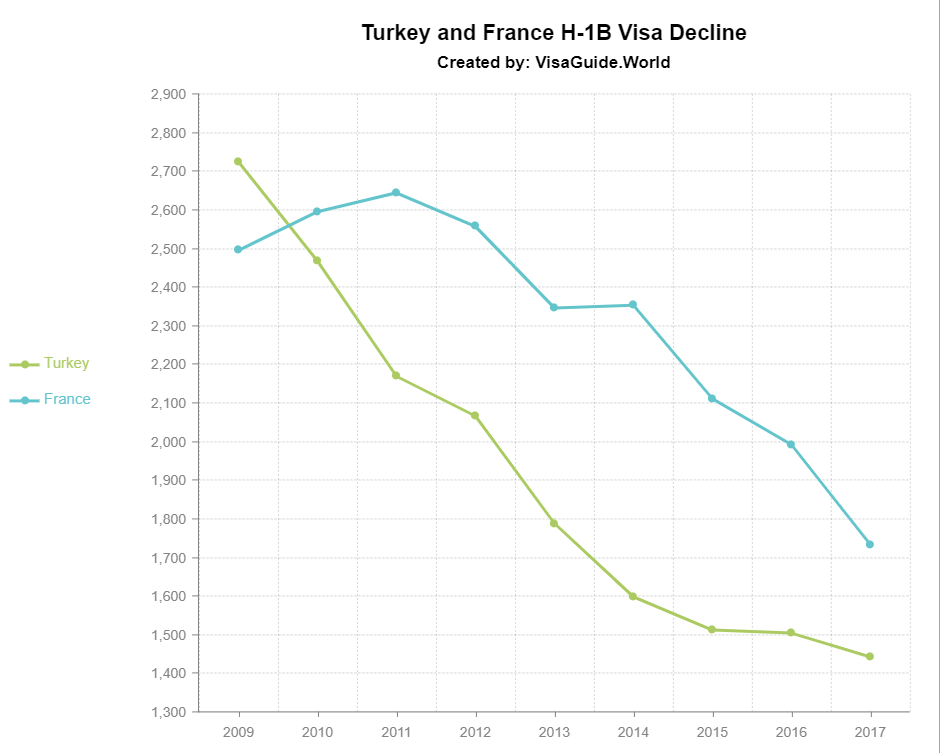 Observers at VisaGuide.World assess that in 2019 there will be an increase in the number of applications somewhere between 2% to 8%.

“Taking into account the latest changes, as the requirement of firstly applying electronically, for which we still do not know if it will be available for FY 2019, there will surely be an increase of 2% to 8% in the number of applications,” Ukëhajdaraj explains.

Indians will still account the highest number of applicants; however, the number of women applicants is expected to increase due to the risks of H-4 holders being scrapped off of the right to work. A number of potential H-4 visa holders may turn to the H-1B visa program, as a way to join their spouses working in the US.