Qatar World Cup 2022: Things to Know Before You Travel

Qatar’s stadiums will bring together over one million fans from all parts of the world for the biggest football event ever held, even though it is the smallest country the FIFA World Cup has been organized.

Despite criticisms over corruption, money laundering, maltreatment of international workers, and other unlawful affairs during the preparation of the stadium for the World Cup, FIFA confirmed through a statement that Lusail stadium is among the eight stadiums that will host the World Cup 2022, while the first game would be held at the Al Bayt Stadium in Al Khor, VisaGuide.World reports.

“The FIFA World Cup 2022 will kick off with an even greater celebration for local and international fans as host country Qatar will now play Ecuador on Sunday, November 20 at 19:00 (16:00 GMT) as part of a stand-alone event,” FIFA pointed out in this regard.

What is the Hayya Card?

All internationals who plan to travel to Qatar must at first know the entry rules in order to become part of this event.

Authorities in Qatar have confirmed that all internationals who plan to travel to Qatar for the FIFA World Cup from November 1 this year should hold a Hayya Card before entering this country. The card will be available immediately following the approval through the Hayya app; from this requirement are excluded Qatari Residence permit holders.

However, it is unclear whether travelers on Qatar temporary work visas are obliged to hold the Hayya card or not.

A Hayya Card, also known as a Fan ID, is a document that is issued by FIFA World Cup Qatar 2022, and all persons attending any of the matches held in Qatar will be required to hold such an ID. It has been clarified that travelers must hold a Hayya card as well as a match ticket in order to enter the stadium.

The Hayya Card serves as an entry permit to Qatar for travelers from other countries; however, those who plan to travel to this country before November 1 will be eligible to do so following their visa categories’ requirements. However, they still need to have the Hayya card to enter the stadium.

Who Can Get a 90-Day Visa on Arrival in Qatar During the World Cup?

Nationals from the following countries can secure a visa-on-arrival for 30 days from the date of issuance and are also entitled to spend more than 30 days in this country during a single trip or multiple trips. Such a visa can then be extended for a further 30 days in-country.

Citizens of India and Pakistan Subject to Additional Entry Rules

All persons from India and Pakistan planning to travel to Qatar are subject to additional entry rules, despite the fact that they are permitted to apply for the 30-day visa waiver/visa on arrival for single or multiple-entry visits following the 30-day period from the date of initial issuance.

According to an announcement of the Newland Chase, travelers from both countries mentioned above are required to follow the rules mentioned below:

What About GCC Countries’ Citizens?

This means that citizens from Kuwait, Bahrain, Saudi Arabia, Oman as well as the United Arab Emirates are not required to have a visa when planning to travel to Qatar.

According to the figures provided by the World Health Organization (WHO), Qatar has registered over 441,445 COVID-19 infection cases and 7,438 750 deaths since the start of the pandemic, while authorities in this country have recently reported that the epidemiological situation has started to worsen in this country.

Therefore, travelers from all other countries are required to carefully follow entry rules, taking into account the information provided by the Ministry of Public Health, or consult FIFA travel advice.

In addition, internationals are obliged to have a Qatar Entry Registration and present it upon their arrival in this territory.

At present, travelers are obliged to present a negative result of the Coronavirus PCR test not older than 48 hours before their entry.

As for the quarantine requirement for internationals arriving from other countries, it will only affect those who have not completed their immunization process against the Coronavirus.

Authorities in Qatar have clarified that those who are not fully immunized against the virus are obliged to stay self-isolated for a period of five days in a designated hotel.

Qatar accepts as valid proof of vaccination only the following vaccines:

In addition, it has been reported that the workers, players as well as technical staff from each country must be fully immunized in order to be permitted to participate in the World Cup that will be held in Qatar.

Regarding the issue, the government of Qatar also announced that it is attempting to acquire a total of one million doses of the COVID-19 vaccine in order to immunize all attendants that are not fully vaccinated, but still, it is not clear whether vaccines will be offered to attendants.

In order to apply for the entry registration in Qatar, internationals are required to upload the following documents:

According to What’s on the report, a total of 30 return flights per day will take off from Dubai for Doha with flydubai; at the same time, Air Arabia will put on 14 daily flights between Sharjah and Doha besides, apart from their thrice daily services.

There are two borders that should be crossed in order to reach Qatar: UAE to Saudi Arabia as well as Saudi Arabia to Qatar.

According to the National, the rules for driving to Qatar have been amended; thus, all persons traveling to this country by car are urged to park on the Saudi side of the Abu Samra land border and take a bus into Doha.

In Qatar, the same-sex marriage, domestic partnerships or civil unions, are considered illegal while the country’s authorities criminalise both men and women under the Penal Code 2004.

Following the Constitution of Qatar, Islam is the state religion, while Islamic law accounts for the main source of legislation. According to the UK-based Organization Human Dignity Trust, in addition to the penal code, Qatar operates an interpretation of Sharia law which criminalises sexual activity between men and between women, and the death penalty it is also possible.

Qatari’s laws have raised concerns among the LGBTQ+ community people about whether it is safe for them to travel to this country in order to participate in the World Cup. In this regard, an article provided previously by the Guardian said that authorities in Qatar have failed to give a guarantee to LGBTQ+ community fans that they would be safe during the football event.

However, recently, Sheikh Tamim bin Hamad al-Thani told the United Nations General Assembly that the country would open its doors to all fans without discrimination in order to enjoy the football matches and the amazing atmosphere of the tournament.

“The Qatari people will receive with open arms football fans from all walks of life. The world will see that one of the small and medium-sized countries is able to host global events with exceptional success, in addition to its ability to provide a spacious ambience for diversity and constructive interaction between peoples,” Sheikh Tamim bin Hamad al-Thani said, according to VOA.

He added that all fans from this community would be safe and welcomed to this year’s World Cup, without discrimination, as part of an effort to ease fears raised by LGBTQ+ activists.

Is There a Dress Code for Internationals Traveling to Qatar?

As November is approaching, travelers from other countries are getting ready to travel to Qatar in order to support their favorite football teams; in addition to their entry rules, internationals should also get informed about the dress code that is considered appropriate in this Arab territory.

Despite the fact that Qatar attracts a large number of internationals and it is known for its tourist attractions, culture and gastronomy; following the host country’s religion, there are some rules that international visitors should take into consideration, following the country’s rules.

It has been confirmed that there is a dress code that tourists must follow in public spaces; otherwise, they risk being subject to a penalty fee if they do not comply with them.

Even though travelers are not urged to wear the traditional costumes of Qatar, women’s and men’s dress codes should be conservative.

Women should cover their shoulders, and shirts must not have cleavage. In addition, leggings or ripped pants are also prohibited, while bikinis can only be used in hotel pools and beaches that are not for families.

As for men, their shirts must not contain offensive language or drawings, while shorts must be below the knees. Tank-tops are also prohibited.

Are Internationals Allowed to Drink Alcohol During the World Cup?

Alcohol is prohibited in almost all restaurants, and it can’t either be found in grocery stores. Besides, it is illegal to be drunk in public.

Such rules have also raised concerns among travelers about whether they will be able to drink during their visit to Qatar, but the latter authorities have said that they are working to facilitate the rules for those who come from other countries.

“Though alcohol sales are prohibited in much of the country, organizers are considering sales inside soccer stadiums and have said that fans will be able to drink in designated areas,” according to a report provided by Sport Destinations.

It has also been stressed that fans will be permitted to drink beer in stadiums.

“Qatari officials are weighing whether to relax the country’s ban on alcohol at sporting events amid pressure from FIFA and Anheuser-Busch InBev NV to let soccer fans drink beer in stadiums at the 2022 World Cup, according to people familiar with the matter,” according to a report published previously by Bloomberg.

Earlier this month, authorities in Qatar confirmed that alcohol would be served in some parts of the stadium at Qatar’s FIFA event.

“We want people to come and have experiences they will never forget,” CEO Nasser Al Khater said to BBC Sport.

Be Careful With Hand Gestures

Hand gestures in Qatar can lead persons to punishments or even fines after they are considered a serious matter in this country.

Unlike in Western countries, doing the thumbs-up sign in Qatar is like using the middle finger. In addition, using the finger to ask also has an offensive connotation; thus, people are urged to use their palms and hands.

Crossing legs also can be interpreted as a sign of arrogance or disrespect; in particular, if you stay in front of an aged person while pointing the index finger can also be considered rude, according to a report provided by Sports Destinations. 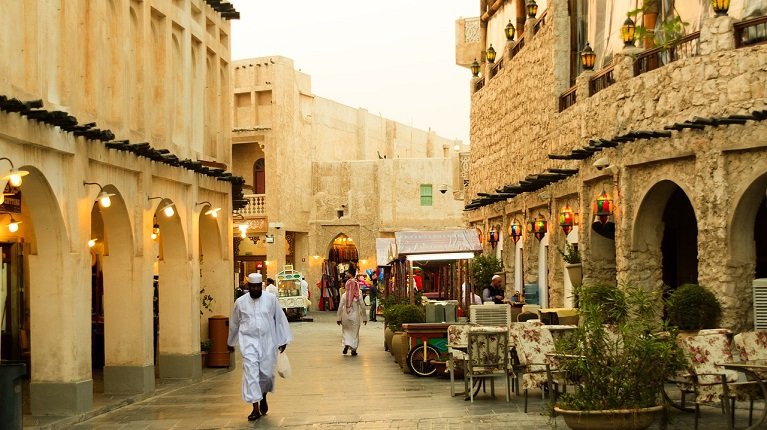