40% more foreign people have applied for a Greece Golden Visa in 2017 in comparison to the previous year. According to the figures of the Ministry of Migration Policy more and more internationals are considering investment in Greece every year, while the number of people who have applied for a Golden Visa has been the highest ever.

The Greek Golden Visa scheme requires an investment of €250,000 euro in a property in Greece. Right now it is the cheapest Golden Visa in Europe, 50% cheaper than they used to be, following the economical crisis. When the program was launched in 2013 at the time of economic crisis, only 16 people applied to obtain such visa, while in 2017 the country saw 2170 applicants.

The benefits of holding a Greek Golden Visa are many. A Greek Golden Visa holder automatically becomes an EU resident since Greece is a member of the European Union. The holder is also allowed to move freely, since the country is part of the Schengen Zone of Europe. The spouse, minor and dependent children up to 21 of the Property Investors also are granted with a five years residence permit, and all of the benefits as the latter.

The fact that one is not required to live in Greece prior or during the application, or even after residency has been granted, makes the Greek Golden Visa very expedient.

According to the recently voted amendments of Citizenship Code, the years fulfilled by Golden visa will be taken into consideration, when a Property Investors applies for a Greek Citizenship, which requires 7 years of continuous residency in Greece.

Most of the residence permits for homeowners have so far been given to buyers from: 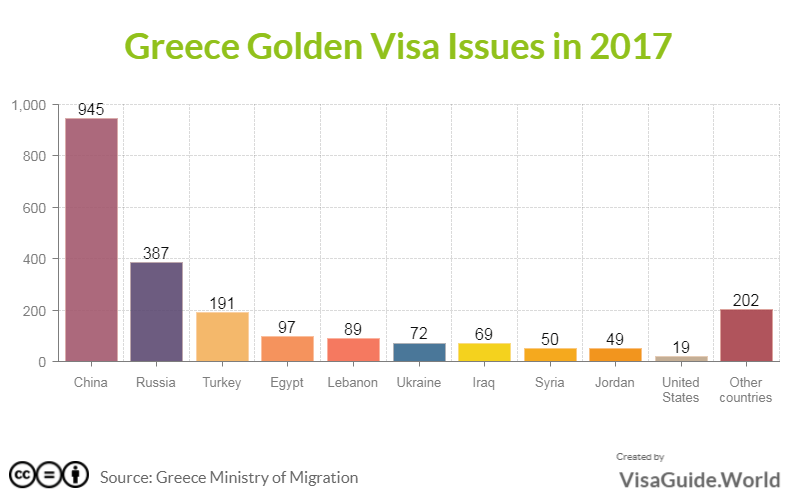 As claimed by the latest data from the Bank of Greece, the amount of foreign direct investment in Greece has jumped discernibly.