Despite an overall continuously increasing number of EU Blue Card applications since the program was introduced six years ago, Germany is still the top favorite country for highly skilled migrants.

A report published recently by Germany’s Federal Office for Migration and Refugees (BAMF) shows that Germany has issued 85% of the total number of Blue Cards granted by the EU countries since 2012, which is 104,000 Blue Cards.

“In a comparison of all EU countries, Germany is the leader in the issuing of the EU Blue Card. In 2017, 84.5 percent of all EU-issued Blue Cards EU were issued by Germany. It was followed by France (4.3 percent), Luxembourg (2.8 percent), Poland (1.9 percent) and Italy (1.2 percent),” the report by BAMF says. 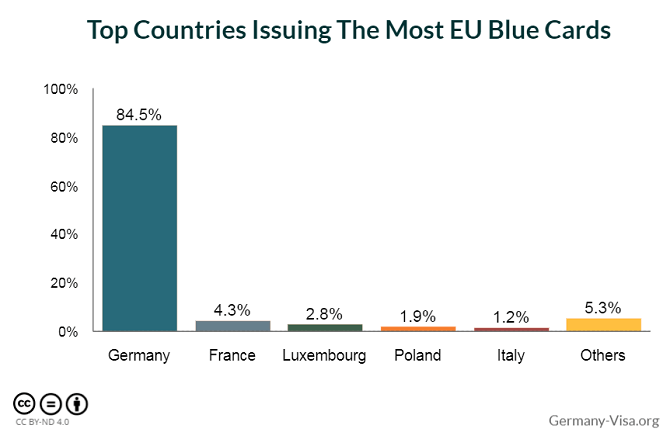 The number of Blue Cards issued each year by the EU member states:

At the same time, on the same year, 2017, 15,893 residence permits were issued for family members of EU Blue Card holders to come and join them in the EU. Once again, Germany accounted for the vast majority of such permits granted. 13,795 people that make 86.8 % of the EU total, got a permit to move to Germany with their family members.