Amid the Coronavirus pandemic, which even the most powerful world countries are struggling to contain, the United States has followed the example of many countries by introducing travel restrictions as one of the measures to fight the further spread of the virus.

At first, on March 11, 2020, President Trump issued three proclamations through which he suspended entry for foreign travellers who in the last 14 days before their trip to the US has been in China, Iran and the 26 Schengen Area Countries.

Soon, the United Kingdom and Ireland, both of them members of the EU but not of the Schengen Area, were added to the travel ban.

According to the US Homeland Security, these measures have been undertaken in a bid “to safeguard the homeland against the further spread of the coronavirus.”

Nationals of Which Countries Are Impacted?

Affected: Foreign Nationals.  The ban applies to foreign nationals of any country with qualifying travel within the impacted countries listed. 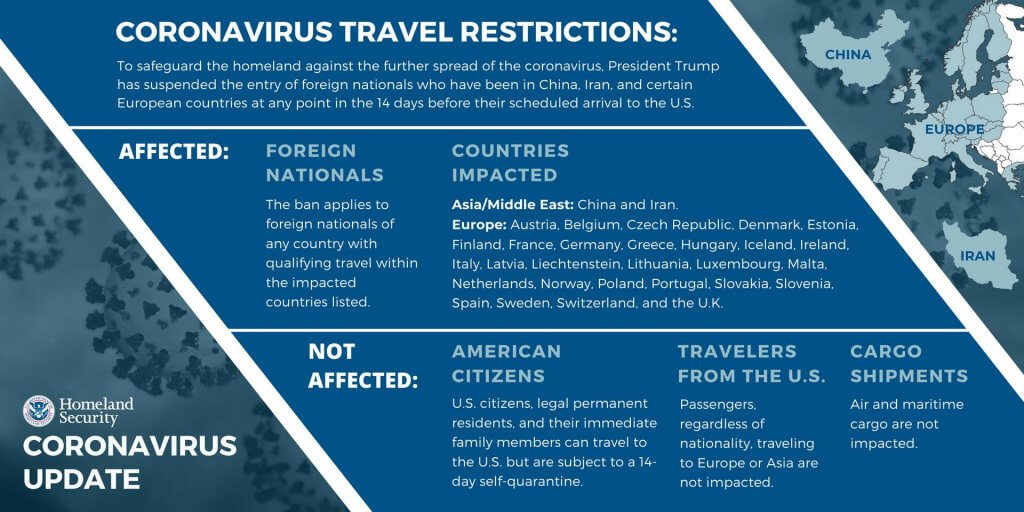 Exempt from the US Travel Ban are all are American citizens, which are:

Additionally, all travellers from the US – passengers, regardless of nationality, travelling to Europe or Asia are not impacted. Air and maritime cargo shipments are not affected, either. 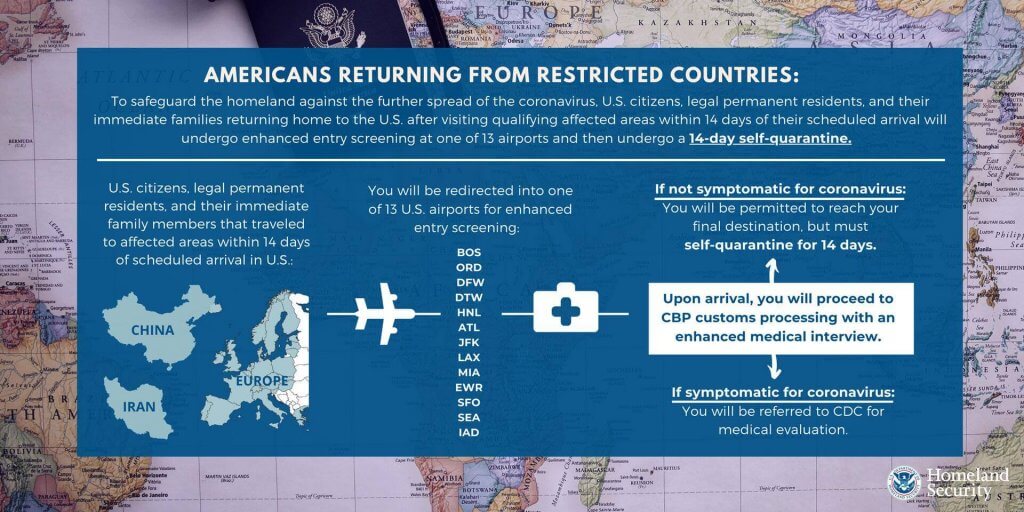 American citizens, legal permanent residents, and their immediate families who have found themselves in an infected area during the outbreak of the pandemic, and haven’t returned home yet, are permitted to travel back to the US.

Upon arrival to the US, these travellers will undergo routine airport checks, and will then be subject to enhanced screening.

They will also need to give information related to their medical history, current condition, and asked for contact information for local health authorities.  Additionally, some passengers will have their temperature taken.

They will be given written guidance about COVID-19 and be allowed to proceed to their final destination. Besides, they will have to self-quarantine for 14 days after their arrival.

During these 14 days, they will be contacted by local and State public health, who will check on the condition of every passenger.

Other Measures of the US to Curb COVID-19 Outbreak

Aside from the travel ban, Trump administration has taken several other measures and restrictions in order to prevent a further outbreak of the coronavirus in the country and to keep the situation under control.

In cooperation with Canada, both countries have closed their shared border for nonessential travel, with mutual agreement. Travellers who want to cross the border for recreation and tourism will not be permitted to do so.

On the other hand, the United States government announced that the US embassies around the world have temporarily suspended their services, due to the deadly virus. After the US government proclaimed coronavirus pandemic a national emergency, the US J1 summer visa program will also be suspended for 60 days.