Information about the Schengen Area and Schengen Countries

The Schengen Area is a territory of 26 European countries. It consists of 22 European Union member states and four other countries that are part of the European Free Trade Association, which are Norway, Iceland, Switzerland, and Lichtenstein. 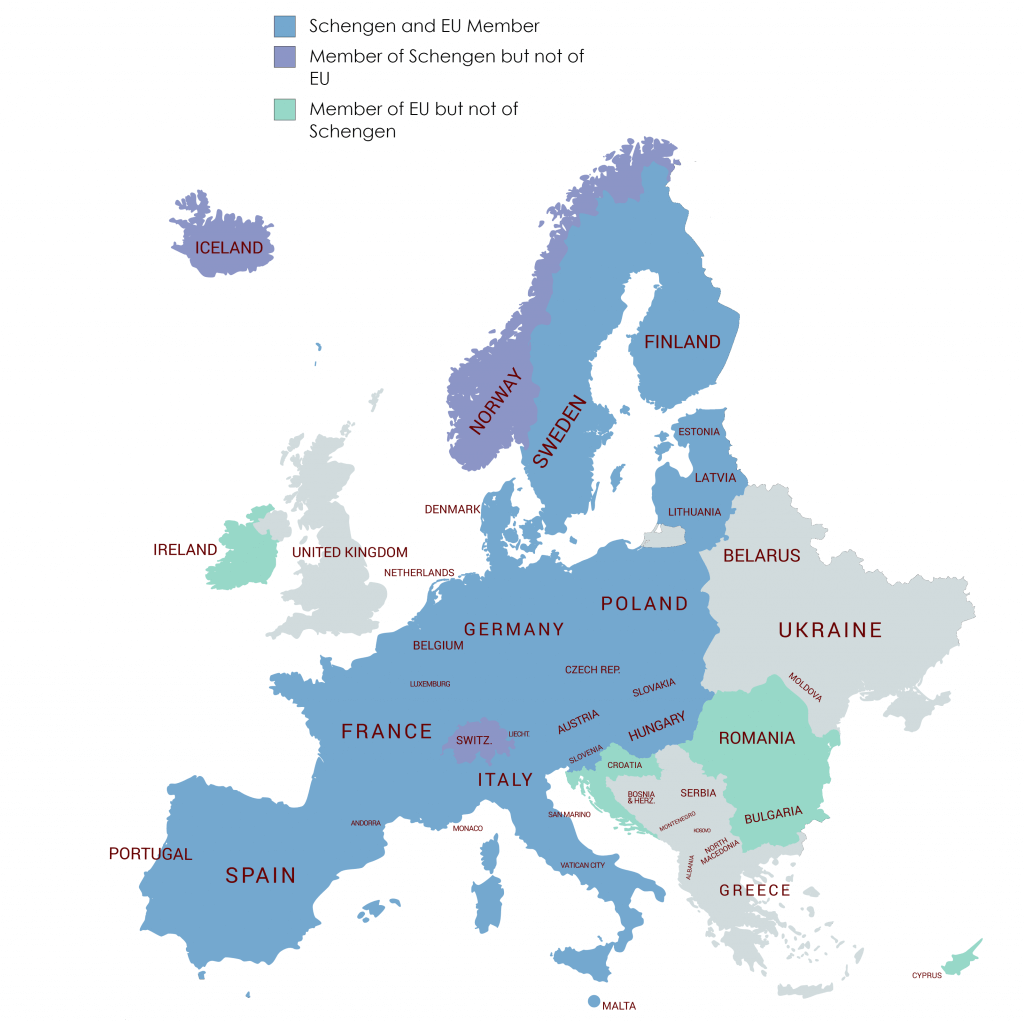 What are the Countries in the Schengen Area?

Though 22 out of 27 European Union member states are part of the Schengen Zone, Cyprus, Bulgaria, Romania, and Croatia—have not yet been admitted to the Schengen area.

Cyprus, which joined the EU in 2004, has to solve the Cyprus dispute before joining the borderless territory of Schengen. On the other hand, although Bulgaria and Romania joined the European Union in 2007, their bid to become part of Schengen has been rejected by the Council of Minister on September 2011.

Whereas Croatia was requested to conduct a technical evaluation which started in July 2015. On June 2017 it joined the SIS II for law enforcement cooperation, and the further progress is a political issue.

The Republic of Ireland is the only EU member that refused to sign the Schengen Agreement, prior to the 2004 enlargement. Ireland and the UK  have formed a Common Travel Area with passport-free travel for their citizens and the three British Crown Dependencies of Jersey, Guernsey and the Isle of Man, that are outside the European Union.

Since Britain refused to sign the agreement because it is easier for an island nation to maintain borders, while Ireland assessed that it was not in its interest to end the travel agreement with Britain and reestablish the border checks.

Are European Microstates Part of the Schengen Zone?

Though Monaco, San Marino, and the Vatican City have no border controls with the Schengen countries that surround them officially they are not part of the Schengen Area. While Monaco has an open border with France, the Vatican City and San Marino have an open border with Italy.Andorra retains border controls with both France and Spain and accepts Schengen Visas (multiple-entry visas only).

On the other hand, Liechtenstein which has been a Schengen zone member country since 2011, does not issue visas but recommends visitors to apply for a visa at other Schengen countries.

Territories of Schengen States Outside the Area

The Canary Islands, the Azores, and Madeira are the only countries which are part of the Schengen Zone, while they are not located in the European continent. The territories of the European Union Members that are outside of Europe, are exempted from the European Union.

For example, the French overseas departments of French Guiana, Guadeloupe, Martinique, Mayotte and Réunion, and the overseas collectivity of Saint-Martin as well, are part of the European Union but do not part of the Schengen Zone.

The six Dutch territories in the Caribbean and the Danish territories of the Faroe Islands and Greenland as well are neither part of the European Union or the Schengen Area.

The essential features of the Schengen Area which are based on the elimination of borders between the European member countries are as follows:

The Schengen rules still allow national authorities of each country to exceptionally and temporarily reintroduce internal border controls in case of a serious threat to security or of serious deficiencies at the external border that can put the overall functioning of the Schengen area at risk. This is regulated through the Regulation (EU) No 1051/2013 that the EU has adopted.

Criteria to Join the Schengen Zone

The non-Schengen Area countries that wish to become members need to fulfill some criteria in order to be able to join the area. This is regulated by the Council Regulation (EU) No 1053/2013. Among the main and most important conditions are:

Applicant countries have to undergo a “Schengen evaluation” before joining the Schengen Area. There is also something called a Schengen Evaluation Mechanism, which controls the member countries, whether they are carrying their duties as they are supposed to. Approximately, each year 5 to 7 member states are evaluated through visits by the Commission teams of experts. After each visit a Schengen Evaluation Report is drawn up. If it identifies any weakness on the evaluated country, then recommendations for remedial action are presented.

What is the Visa Policy of Schengen Area Countries?

The European Union member states have a common list of the countries, the nationals of which need a visa in order to enter the Schengen territory. The EU decides on visa exemptions case by case.The Schengen states also have common rules for issuing short-stay Schengen visas, which are valid within the entire Schengen area. These visas allow a person to stay and travel in the territories of Schengen states for a maximum of 90 days in any six month period.

Depending on the purpose of your travel the embassy or consulate of your Schengen destination country will issue you the appropriate visa.

How Can I Gain Entry Into the Countries of the Schengen Area?

Technology plays a crucial role in the Security System of the Schengen Area, in the reinforcement of external borders and the collecting, processing, and sharing of information that is relevant to external border management.

The Visa Information System (VIS) consists of a central IT system which is linked to national systems through a communication infrastructure and collects all of the information entered in the latter, thus permitting the Schengen countries to exchange visa data.

Its main purposes are as follows:

The Schengen Information System (SIS) has been established by the Schengen member countries in order to have a highly efficient large-scale information system that supports external border control and law enforcement through cooperation between the countries.

The system enables competent authorities as police to enter and consult alerts on certain categories of wanted or missing persons. Each alert contains information about particular persons and objects, and also clear instructions on what to do when not found. Its main goal is to help in the preservation of internal security in the Schengen zone in the absence of internal border checks

Its main purposes are as follows:

The Schengen Information System operates in the European Union member states, aside of Ireland and Cyprus, and the 4 Schengen associated countries (Norway, Iceland, Liechtenstein, and Switzerland).

However, there some limitations in the use of SIS for some of the EU countries:

Ireland is still carrying out preparatory activities to connect with the SIS.

Cyprus is not yet connected to the SIS since it has a temporary derogation from joining the Schengen area.

The EURODAC is Europe’s first asylum fingerprint database. It has been established in 2003 and consists of a central system that gathers all of the fingerprint data registered by the national systems in the Schengen member countries. Every person that applies for asylum in the EU has his fingerprints registered in this system.

One of the key achievements of this system is that allows the member states to compare fingerprints linked to criminal investigations, for the purpose of prevention, detection, and investigation of serious crimes and terrorism.

The first reform package of the EURODAC was introduced in May 2016, proposed the use of other biometric identifiers as facial recognition and collection of digital photos.

The first fingerprint database was set in German, two years after the Dublin convention in 1992, and the EURODAC was established after more than 10 years later as a result of frequent migrant flows in Europe.